Have you failed to timely file a complete foreign information report such as Forms 5471, 5472, 114, 8938, 3520, 8865 or any of the other forms? If you are not sure what these forms are but you are either a foreign owner in a U.S. business entity or American owner of a foreign business entity or own foreign financial accounts or other specified foreign assets either directly or indirectly through ownership in foreign entities or persons you are probably delinquent. Even if you were not an owner but merely had signing authority  with the ability to control monetary transfers of funds in foreign accounts, or a Director or officer of a foreign corporation that was deemed a Controlled Foreign Corporation (or other entity), or if you are the beneficiary of a foreign trust or estate  you have information return responsibilities. The bad news is that the IRS or U.S. Treasury Department will assess a non filing or incomplete filing penalty of $10,000 for each and every form and for every year of delinquency once they find out, and with the new information sharing programs between the U.S. and other countries in effect, it is not about if they find out, but more of a matter of when..and there is no statute of limitation to protect you.

The good news is there are government programs available that can help you get caught up with past due income tax returns and foreign information reports and if there is no unreported or unpaid U.S. income tax  bringing your tax matters current could be relatively painless if you act now the bring yourself into compliance before the IRS sends you a Notice of Penalty Charge CP215. 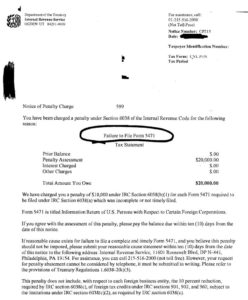 Beware, your college student may…

Service Businesses That Qualify for…

IRS Will Need at Least…

Obamacare Is Wounded, But Not…

Don’t Miss Out on New…